The Memory Weaver by Jane Kirkpatrick

The settling of the Western United States is not a piece of the American story I am familiar with.  Through this latest offering from Jane Kirkpatrick – I want to know a little more.

We meet Eliza Spalding Warren after the death of her mother, and just as she is coming of age.  She struggles with past memories of a time when she was held hostage during an a Cayuse Indian uprising.  Without naming it, we are very accurately walked through moments of PTSD shown through flashbacks.

Eliza is largely responsible for the care and maintaining of the family home while her missionary father continues with his work- how ever joyless it is for him.  She falls in love and longing for a different life – she and Mr. Warren elope.  Life is hard for them, but they are a determined to succeed, despite a myriad of personal demons they both carry, as well as simply the challenge of life in a wilderness state.

Always trusting in a God who is very real to Eliza, her husband comes to know and follow God’s plans.  We learn from Eliza’s mother’s diary of events in the past, and the foundation of Eliza’s inheritance of faith.

We learn that although facing the past – even as our own recollections might not be the exact way things happen – is healing.  Eliza has occasion to revisit the site of her trauma, and by talking with people who were there with her, she sees that God was placing every detail of her protection all along.  The lesson for us all is that by facing our past hurts and wounds, with God’s help, we can see the truth of our triumph through and in spite of them.  We might even see that God uses these to make us stronger and healthier for it.

I enjoyed this read – it was great to learn an aspect of American history I had not known before.  It was also a great way to illustrate the brave steps we each must take, as we seek to recover from past traumas.

Thank you to Baker Publishing Group and Graf-Martin Communications for providing this book for my independent review.

Posted by joyfullyyours on September 28, 2015 in Uncategorized

9 Thoughts That Can Change Your Marriage – Shelia Wray Gregoire

I wish I had been able to read this book about 23 years ago, this week.  You see, as this appears on my blog, my beloved and I are 1 day away from our 23rd wedding anniversary.  While we did pre-marital counselling (after a fashion really, it’s hard to have those conversations with your dad!), went through an Prepare (R)  Inventory (which was bang on about what our growth areas would be), it still was not always an easy and perfect path.  A grace-filled one, but certainly not perfect and not always bliss filled.

Shelia speaks and writes with an honesty and candor I love.  Her desire is that couples experience marriage in all it’s fullness, as God planned it –  and she pulls no punches when she tackles topics that might make most of us squirm.  Her latest offering is no exception.  Each of the 9 thoughts is a great challenge to every married couple, no matter how many years together they are preparing to celebrate.

Now, I am in no way saying that we are not happy.  Far from it, we have a wonderful marriage.  We make each other laugh every day, we know that we are each other’s priority, and there is no one I would rather spend time with.  He is my rock, cheerleader and main prayer warrior – and he knows the same truths for me.  But…I truly found myself challenged to find better ways to be a better wife.

Thought 1 – “My Husband is my Neighbour”, Thought 2 – “My Husband Can’t Make Me Mad” and Thought 7 – “Being One Is More Important Than Being Right” hit me right between the eyes.  I sometimes think that I forget that he isn’t the only one in the house responsible for the way we function as a couple.  Yet, on days when I’m easily irritated – I could convince anyone that he is.  And some days, those irritations come just a little to easily.  Just this week, I’ve tried to walk the talk of these 3 thoughts, and you know – it’s not the easiest change I’ve ever made, but I can see that it will be worth it.

If I stop and realize that the things that make me not happy, are not his way of making me crazy and really are more my issue that his, then I don’t snap and things don’t get tense…and then, well, then things are just much more pleasant in the house.  A prime exmple of this is how we both re-energize.  I married a man who is an “off the chart” introvert.  He married an extreme extrovert.  Now, an introverted preacher tends to come home from any service of worship as a small puddle.  I want to talk about all the conversations I had after the service, and he just wants to be quiet, and preferably alone.  I can take this need of his as a personal slight, or know that if I respect his need for peace and quiet – I will get all the time I need when he is ready, and when he can do that with the emotional availabilty and energy levels I need him to have.

We recently attended a wonderful wedding.  It was a meaningful celebration as 2 young people joined their lives and faith together.  My beloved and I were honoured to be a part of the day.  While the wedding is over, and they’ll be home from the honeymoon soon – there will be one more gift for them.  I believe that this book is the perfect first building block (after a good Study Bible) for a solid, God-honouring marriage.  I’ll definitely be recommending it for many weddings, and even suggest it as a part of any pre-marital counselling.

I am thankful to Shelia Wray Gregoire and Waterbrook Press for the opportunity to independently review this book.  I have received no compensation for this review.

Posted by joyfullyyours on September 11, 2015 in Uncategorized

A Weekend of God’s Goodness

I was honoured to be asked to be a part of the team that brought a wonderful celebration together this past weekend.  The youngest daughter of a friend of ours was married, and right after she asked my beloved to conduct the ceremony, she asked me if I would create the wedding cake and cupcakes.

Now, I love to bake and to be creative when I do it, and I developed a bit of a reputation in our circles for doing fun things with cupcakes, but to be asked to do the centerpiece for their dessert table, I was truly humbled, honoured and a little nervous.

Over the months of planning, the bride and I discussed a few ideas of what the caked would look like, and about 2 months before the wedding, with one moment of inspirations – we settled on 2 possible options for the design.  Then just 3 weeks to the celebration – I baked a bottom layer sample, and decorated the cake in halves, with both options depicted.

The final look was created, and the baking began.

Flash forward to this weekend, and my anxiety increased about this thing I’d agreed to was becoming a reality, but with the complication of extreme heat…

So, Friday as we headed to the location where the wedding would be, I packed up everything necessary to bring the dessert to life.  Saturday morning would be the time to create.  And the heat increased…

Anxiety over the final look and the temperatures (did I mention it would be hot?) had full set in, but as I began to create the look we had planned a calm set in. 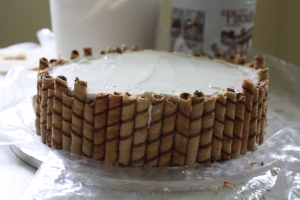 The day was beautiful, and the bride, groom and families had done so much work to bring things together.  The day, although hot, was sunny with a beautiful breeze.  Indeed the prayers for blessings on this day were being honoured.

You see, this was not just an ordinary wedding, or an ordinary couple.  Having met in the Dominican Republic, when the bride was travelling with her mom and one of her mom’s friends their love story was written over the last 2 1/2 years.  Both come from a fine and strong Christian home.  Both will have watched as Jesus was welcomed into the everyday of their parent’s lives, and that set the pattern for their lives.

Their vows, the Scriptures read at the service, the reverence of the ceremony – were all to point us to the fact that we had gathered to Worship God first and foremost.  The couple was even presented with their first gift – a Bible – from the congregation where they will make their home.

As I reflected on the day that had been, and especially the speeches that had been given by both sets of parents, I could not help but remark that both thanked God that their Christian child had found a partner who shares the same faith.

There was a brief rainy moment – which lasted for all of 10 minutes, but did nothing to interrupt the proceedings of the day.  God had been asked to bless the day, and He did.

It is always a joy to watch as 2 of His children join their lives together – as they were reminded at the wedding – so that God may show His love on earth through godly marriages.

Posted by joyfullyyours on September 7, 2015 in Uncategorized